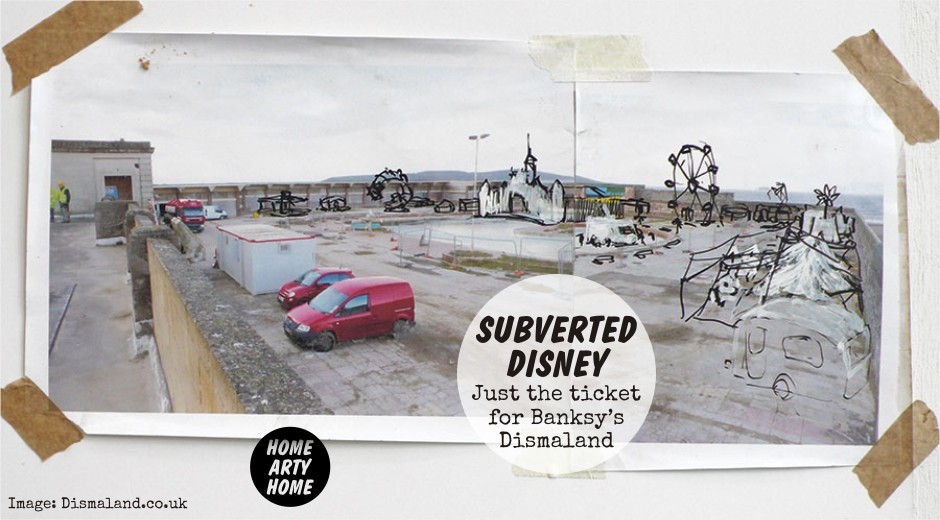 Banksy surprised everyone with his latest witty and thought-provoking project where he’s managed to make a comment on rundown British seaside towns, have a dig at Disney, and simultaneously put Weston-Super-Mare on the map.

It’s amusing to think of international art critics, and die-hard Banksy fans, flying in to queue for nearly four hours at the resort, but such is the pull of the artist, and the ambitious scale of Dismaland, it’s understandable. He’s collaborated with artists from across the globe to create a cynical and political theme park that stimulates as well as entertains.

Personally I’m amazed that more hasn’t been made by the media of, in my opinion, one of the strongest pieces in the theme park: the overturned carriage with the dead Disney princess and bank of paparazzi refers to Diana and how her fairy-tale life came to an end amongst pursuing photographers at the end of August 18 years ago, but maybe the lack of column inches is because newspapers still feel responsible.

For those of us that won’t be able to get to Weston, we can bring some of the feeling into our homes with art that takes the Mickey.

1. Lazy Oaf – A3 limited-edition print
2. Pure Evil – Charles Uzzell Edwards is one of the artists with work on display at Dismaland. You can pick up his limited edition killer bunnies from Royal Doulton.
3. Wallpaperdirect – Not strictly subversive as these disembodied gloved hands of Mickey are official, yet this wallpaper comes across like the Disney version of Repulsion (with Minnie as Catherine Deneuve perhaps).
4. Ben Allen – Limited edition signed & numbered print
5. Keith Haring & Andy Warhol – Andy Mouse print
6. King & McGaw have a selection of photographs taken of Banksy’s street art
7. Pure Evil again – who could resist owning one of these ltd-edition bunnies!?